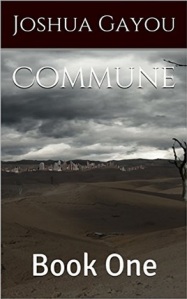 For those of you who prefer Kobo over Amazon, Commune Book One is now available as an ebook.  Click here to get you copy now!

For those of you who have already gotten a copy over at Amazon, thank you so much!  I am both humbled and gratified that you’ve decided to come spend a little time in my world.  I look forward to seeing you in books two and three.

For those of you stumbling on my novel for the first time, I’ll offer the following details (outside of the standard plot synopsis, which you can read on the purchase pages for the book):

What I ended up writing was a zombie story without all the zombies.  I’m a big fan of the post apocalypse survival genre and a lot of my favorite works in the arena involve zombies.  That being said, I didn’t want to write another zombie book.  Even in those books that do involve the zombies (those that I enjoy, anyway), the zombies are only really a threat for so long before such encounters become routine.  When zombies become normal, the real and more extreme danger always presents itself: other humans.  To my mind, the most fascinating subject matter is explored when the story starts dealing with competition between surviving communities for limited resources and how they choose to behave in these situations.  In my book, I just wanted to skip the zombie part altogether and dive right in to dealing with who I believe have the potential to be the scariest, most threatening monsters: us.

When I wrote this book, I was looking (in part) to create a story that veers away from a lot of the standard tropes that I’ve been seeing in the genre (everyone always turns into opportunistic savages, the military is evil, and so on).

There are definitely evil people in this story but I wanted to explore the idea that there is a world of difference between your basic, boring, mustache-twirling evil and a person who is basically decent but focused only on looking out for himself.  One of the primary themes I work on is that it’s very likely easier and safer in the short term to go “every man for himself”, however you end up actively creating a world in which you wouldn’t want to live.  The characters in the story struggle with this concept, having to establish a balance between preservation of self and preservation of humanity.

Additionally, the story is delivered in the form of a first person narrative from people who may not necessarily want you to know every little thing about them.  My intent is that, for some of the characters, you learn more about what makes them tick from what they don’t say rather than what they do…

4 thoughts on “Commune Book One is now Available on Kobo!”